To Facilitate the Culture and Heritage Preservation and Perpetuation Activities of the White Mountain Apache Tribe by Providing Financial and Technical Assistance to the Tribe’s Heritage Program; Supporting the Restoration and Revitalization of the Fort Apache Historic District.

The Fort Apache and Theodore Roosevelt School National Historic Landmark is a resource owned and managed by the White Mountain Apache Tribe with assistance from the Fort Apache Heritage Foundation.

We are located 1/2 mile east of Arizona Highway 73, and 4 miles south of Whiteriver, Arizona. The Landmark is open daily 7:00am to sunset.

The Nohwike’ Bágowa (House of Our Footprints) Museum, which houses permanent exhibits, historical information, cultural interpretation, and a museum shop, is open 8:00am to 5:00pm, Monday through Friday. The museum is also open on Saturdays and 11:00am to 3:00pm on Sundays from May through September.

Please check in at the Nohwike’ Bágowa Museum for permits and information prior to visiting the ruins.

The Fort Apache Heritage Foundation, Inc., was chartered in 1998 by the White Mountain Apache Tribe to provide assistance in the Tribe’s historic preservation, cultural and language perpetuation, and other heritage efforts.

The Foundation is charged with the preservation, rehabilitation, and adaptive reuse of the Fort Apache/Theodore Roosevelt School National Register Historic District following the transfer of administrative management from the Bureau of Indian Affairs in 2007. The Foundation is an active, growing organization and we welcome partners to assist us in bringing Fort Apache back into the active service of the White Mountain Apache people and our guests from all over the world.

We are happy to assist individuals and groups to explore the region and enjoy their visit.

Fort Apache is a scenic drive from Phoenix or TucsoN

We are located 1/2 mile east of Arizona Highway 73, and 4 miles south of Whiteriver, Arizona.

The Landmark is open daily 7:00am to sunset. 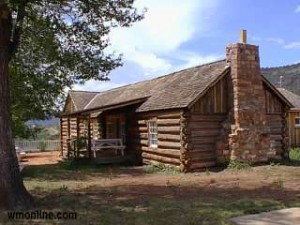 Active duty military and up to five family members receive free admission, Memorial Day to Labor Day. Thank you for your service!

The land upon which Fort Apache now stands had been used by the Apaches for hundreds of years. The surrounding mountains all have names in the Apache language. In July, 1869, Brevet Colonel (Major) John Green of the U.S. 1st Cavalry led a scouting expedition of more than 120 troops into the White Mountains area from Camp Goodwin and Camp Grant to the south. Seeking to kill or capture any Apache people they encountered, the expedition headed north up the San Carlos River, across the Black River, and to the White River in the vicinity of the future site of Fort Apache.

Army scouts reported finding over 100 acres of cornfields along the White River. Escapa – an Apache chief that the Anglos called Miguel – visited the camp, and invited Col. Green to visit his village. Green sent Captain John Barry, urging him “if possible to exterminate the whole village.”
When Captain Barry arrived at Miguel’s village, however, he found white flags “flying from every hut and from every prominent point,” and “the men, women and children came out to meet them and went to work at once to cut corn for their horses, and showed such a spirit of delight at meeting them that the officers [said] if they had fired upon them they would have been guilty of cold-blooded murder.” Green returned to the White Mountains in November, and met again with the Apache leaders Escapa (Miguel), Eskininla (Diablo), Pedro, and Eskiltesela. They agreed to the creation of a military post and reservation, and directed Green to the confluence of the East and North Forks of the White River:

“I have selected a site for a military post on the White Mountain River which is the finest I ever saw. The climate is delicious, and said by the Indians to be perfectly healthy, free from all malaria. Excellently well wooded and watered. It seems as though this one corner of Arizona were almost its garden spot, the beauty of its scenery, the fertility of its soil and facilities for irrigation are not surpassed by any place that ever came under my observation. Building material of fine pine timber is available within eight miles of this site. There is also plenty of limestone within a reasonable distance.

This post would be of the greatest advantage for the following reasons: It would compel the White Mountain Indians to live on their reservation or be driven from their beautiful country which they almost worship. It would stop their traffic in corn with the hostile tribes, they could not plant an acre of ground without our permission as we know every spot of it.”

It would make a good scouting post, being adjacent to hostile bands on either side. Also a good supply depot for Scouting expeditions from other posts, and in fact, I believe, would do more to end the Apache War than anything else. The following spring, troops from the 21st Infantry and 1st Cavalry were ordered to establish “a camp on the White Mountain River.” On May 16, 1870, they began construction of Camp Ord. Over the course of the next year, the remaining troops at Camp Goodwin moved to the site, and the camp would be renamed Camp Mogollon, then Camp Thomas, and finally, Camp Apache. The post was designated Fort Apache in 1879. The Army abandoned Fort Apache in 1922 after many years of declining use. In 1923, the site became the home of the Bureau of Indian Affairs’ Theodore Roosevelt Indian Boarding School. First intended to serve Diné (Navajo) children, by the 1930s, a majority of students at the school were Apache. T.R. School continues today on the very spot to serve as a middle school, under the administration of a school board selected by the Tribal Council.

Since assuming management of most of the Fort Apache/Theodore Roosevelt School property in 2007, the Foundation has applied preservation treatments to nearly every historic building on the site. Complete rehabilitations have been completed on the Commanding Officer’s Quarters, the BIA Club House, and a Teacher’s Cottage.

The Foundation was proud to match funds from the Arizona Humanities Council to support the publication of Nohwigotah/Our Village, a bilingual (English and Ndee Biyati’i [Western Apache]) children’s book created by the Nohwike’ Bágowa Museum and the Cibecue Community School that was released in Spring 2009. The Salt River Project generously reprinted the book, providing us with an additional 1,200 copies to distribute to schools, libraries, and others who might learn about Western Apache language and heritage.

In 2016 the Foundation contracted with the Bureau of Indian Affairs to complete environmental remediation and infrastructure and facilities improvements. During summer 2017 we have completed the removal of three abandoned underground fuel storage tanks and more than 2,000 cubic yards of fuel-oil contaminated soil, and have begun replacing the district’s entire water main system.

Much more is coming as we continue to work with our many funding partners in the revitalization of Fort Apache. Past and continuing support provided by: Arizona State Parks Heritage Fund; the National Endowment for the Humanities; Arizona Office of Tourism; Preserve America; Save America’s Treasures; Arizona Commission on the Arts; Arizona Humanities Council; White Mountain Apache Tribe Permanent Land Restoration Fund; the Boeing Company. We welcome the participation, ideas, and contributions of people to preserve Fort Apache, increase others’ access to it, and enrich it as location of valuable cultural heritage. 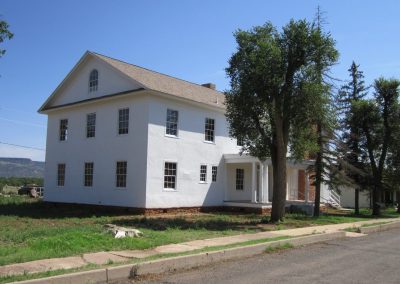